The number of records exposed has increased to a staggering 36 billion. There were 2,935 publicly reported breaches in the first three quarters of 2020, with the three months of Q3 adding an additional 8.3 billion records to what was already the “worst year on record,” Risk Based Security reveals. 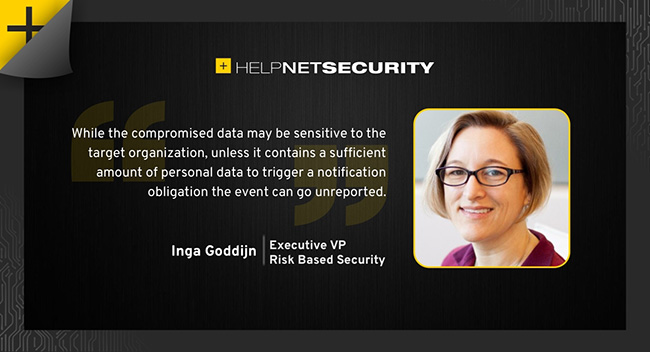 “The quagmire that formed in the breach landscape this Spring has continued through the third quarter of the year,” commented Inga Goddijn, Executive VP at Risk Based Security.

“Breach disclosures continue to be well below the high water mark established just last year despite other research indicating the number of attacks are on the rise. How do we square these two competing views into the digital threat landscape?”

Factors contributing to the decline in publicly reported breaches

The report explores numerous factors such as how media coverage may be a factor contributing to the decline in publicly reported breaches. In addition, the increase of ransomware attacks may also have a part to play.

“We believe that the pivot by malicious actors to more lucrative ransomware attacks is another factor,” Goddijn commented.

“While many of these attacks are now clearly breach events, the nature of the data compromised can give some victim organizations a reprieve from reporting the incident to regulators and the public.

“After all, while the compromised data may be sensitive to the target organization, unless it contains a sufficient amount of personal data to trigger a notification obligation the event can go unreported.”

The Risk Based Security report covers the data breaches reported between January 1, 2020 and September 30, 2020. In addition to the latest breach data research, the report also dissects alarming trends involving the coming November election, where several US voter databases have been shared and discussed on both Russian and English speaking hacking forums.