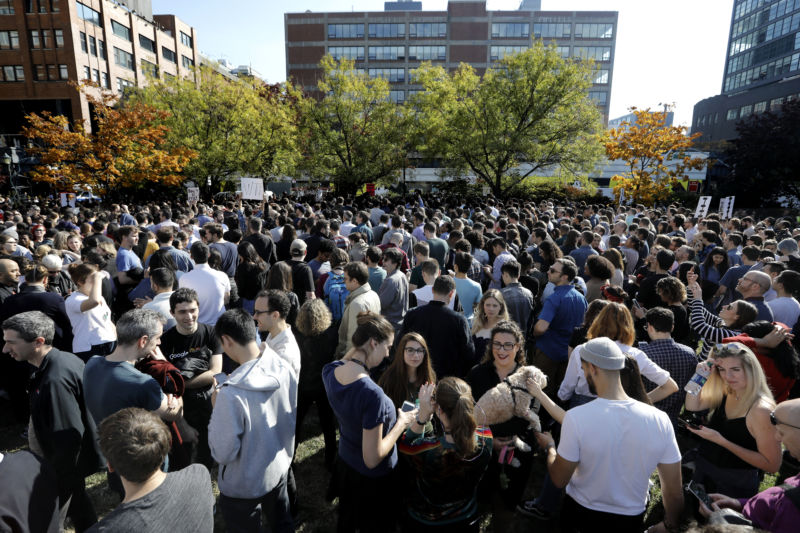 Enlarge / A 2018 walkout to protest Google’s handling of sexual misconduct allegations was an early sign of increasing worker assertiveness at the company.

Another former employee has accused Google of violating federal labor law by firing her for activities related to labor organizing. In a Tuesday blog post, Kathryn Spiers says Google terminated her after she created a browser tool to notify employees of their organizing rights.

It’s the latest sign of tension between Google and portions of its workforce. Last month, Google fired four workers who were involved in workplace organizing. Google said that the employees had violated company policies by accessing documents without authorization. The workers say that these charges were trumped up to justify purging employees who had been effectively organizing Google’s workforce. The National Labor Relations Board is investigating those firings.

Back in September, Google reached a settlement with the NLRB over earlier alleged violations of federal labor law. Under the settlement, Google was required to post a list of employee rights in its Mountain View headquarters.

Spiers says she worked on a Google security team that was focused on how Google employees used Chrome within the company. Part of her job was to “write browser notifications so that my coworkers can be automatically notified of employee guidelines and company policies while they surf the Web.”

So when Google hired a consulting company known for its anti-union work, Spiers wrote a notification that would appear whenever Google employees visited the firm’s website. The notification stated that “Googlers have the right to participate in protected concerted activities.” That’s a legal term of art for worker organizing efforts. It also included a link to the worker rights notification mandated by the NLRB settlement.

Google responded swiftly and harshly, according to Spiers. She was suspended from her job pending an investigation. Spiers writes that Google officials “dragged me into three separate interrogations with very little warning each time. I was interrogated about separate other organizing activities, and asked (eight times) if I had an intention to disrupt the workplace.” She says she wasn’t allowed to consult with a lawyer.

The Communications Workers of America, a union active in the telecommunications industry, has filed an NLRB complaint on Spiers’ behalf. The complaint argues that her firing was an “attempt to quell Spiers and other employees from asserting their right to engage in concerted protected activities.”

“She misused a security and privacy tool to create a pop-up that was neither about security nor privacy,” Hansen wrote. “She did that without authorization from her team or the Security and Privacy Policy Notifier team, and without a business justification. And she used an emergency rapid push to do it.”

Hansen argued that the firing had nothing to do with the content of the message. “The decision would have been the same had the pop-up message been on any other subject,” he argued.