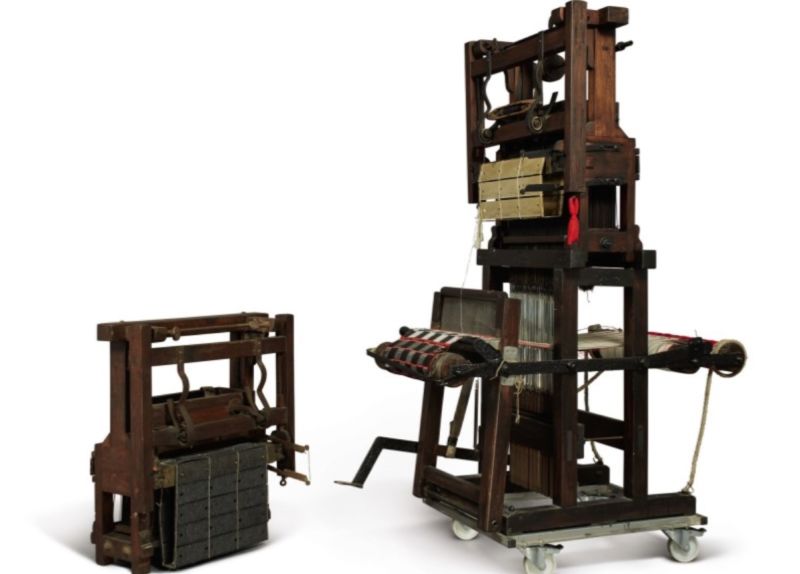 Enlarge / This Jacquard-driven loom, circa 1850, is considered an early predecessor of the first computers.
Sotheby’s

Charles Babbage is widely recognized as a pioneer of the programable computer due to his ingenious designs for steam-driven calculating machines in the 19th century. But Babbage drew inspiration from a number of earlier inventions, including a device invented in 1804 by French weaver and merchant Joseph Marie Jacquard. The device attached to a weaving loom and used printed punch cards to “program” intricate patterns in the woven fabric. One of these devices, circa 1850, just sold for $43,750 at Sotheby’s annual History of Science and Technology auction.

“Technically, the term ‘Jacquard loom’ is a misnomer,” said Cassandra Hatton, a senior specialist with Sotheby’s. “There’s no such thing as a Jacquard loom—there’s a Jacquard mechanism that hooks onto a loom.” It’s sometimes called a Jacquard-driven loom for that reason.

There were a handful of earlier attempts to automate the weaving process, most notably Basile Bouchon’s 1725 invention of a loom attachment using a broad strip of punched paper and a row of hooks to manipulate the threads. Jacquard brought his own innovations to the concept.

Jacquard… conceived of developing a semi-automatic tone-selection device, which would be integrated onto the loom, resulting in quicker production and more intricate patterns. Jacquard’s punch-card system worked much in the same way as a fax machine: each punch in the card directed a black or a white thread into the headstock of the loom, pinpointing the desired thread into place.

The invention was not popular with loom operators, many of whom lost their jobs and took to smashing Jacquard looms in protest.

The mechanism just sold at auction belonged to one of Hatton’s former clients, now deceased. The collector had been trying to establish a museum on the history of computing, grounding his vision in the early attempts to mechanize computation by Jacquard, Babbage, and others. The loom “was his pride and joy,” said Hatton. “He bought the original mechanism and then commissioned somebody to make the loom and a second [mechanism] so he could use it. So the loom is fully operational.”

The piece comes with a large box of accessories, including the original 19th-century punch cards—everything one would need to operate the machine.

Jacquard’s machine was capable of programming patterns with such precision, it was even used in 1886 to create a prayer book woven entirely in silk, using black and gray thread. Only around 50 copies were made. The Sotheby’s auction didn’t offer any rare prayer books this year, but there was a portrait of Jacquard—woven in silk on a Jacquard loom—with a mini-loom and punch card on his desk, as well as another woven silk portrait showing several men in front of a loom holding the aforementioned portrait (so very meta). Those portraits sold for $10,625 and $11,875, respectively.