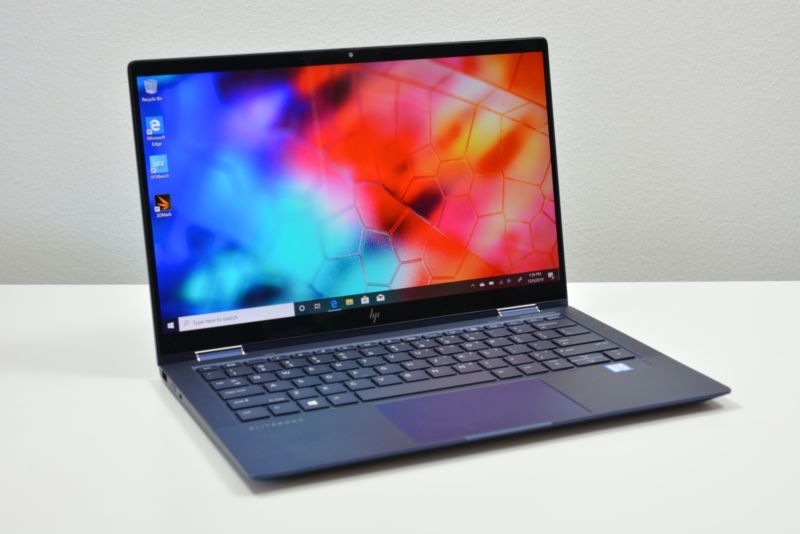 There are more ultra-mobile professionals now than ever before, which is why OEMs are developing increasingly thin-and-light laptops that will appeal to those users. No one wants to add heft to their bag, regardless of whether they’re going off on a 10-hour flight or a 10-minute commute to work, thus increasing the appeal of thin-and-light laptops. But the most mobile among us will only go as thin and light as our performance needs allow us to—if a laptop isn’t powerful or efficient enough to help you get work done, its svelte characteristics won’t make up for that.

Enter the HP Elite Dragonfly two-in-one laptop, which is HP’s answer to this problem. It’s an ultra-slim laptop with a MIL-spec-tested design that weighs just 2.18 pounds, and it has the power and security features of one of HP’s Elite series laptops. HP is betting on the idea that professionals will choose the thinnest and lightest laptop possible that doesn’t compromise the performance or battery life they need to get things done regardless of their location—and that they’ll pay top dollar to get it. We spent a few days with the Elite Dragonfly convertible to see how well-designed it actually is and to see if taking thin and light to the extreme hinders any necessities.

Starting at $1,629 from HP
(Ars Technica may earn compensation for sales from links on this post through affiliate programs.)

Typically, laptops that pride themselves on being thin and light above all else tend to feel only a bit more durable than a precious heirloom that your kids aren’t allowed to touch. The Elite Dragonfly feels sturdier than most laptops that I’ve used that share the same size and weight class. Measuring 16mm thick and weighing between 2.18 and 2.5 pounds, it’s an easy backpack companion, and I was happy to see that neither its chassis nor its lid flexed at all when put under pressure.

That may be due to the extra layers of magnesium used in the laptop’s keyboard area, cover, and bottom portions that reinforce its design, along with other internal structures that keep it steady and durable. The Dragonfly passed 19 MIL-STD-810G tests, and HP placed particular emphasis on testing the machine for drops, shocks, and vibrations.

Many flagship laptops aren’t MIL-spec tested, or they only pass a limited number of tests, but this type of testing is standard for HP’s Elite line. While these are not “rugged” laptops by any means, adding this level of MIL-spec durability means that you can accidentally drop this or leave it in a precarious situation and it will most likely return to you unharmed.

The Elite Dragonfly gets its name from the “dragonfly blue” finish that coats its chassis. For now, the machine is only available in this color, which will inevitably make some users scowl. It’s most similar to navy blue but with a pleasant brightness that subtly comes through whenever light hits it. Whether the blue finish speaks to you or not, it’s a welcome change from the sea of silver, barrage of black, and plethora of pink consumer electronics that dominate the market now. The entire chassis is made from magnesium, but HP also integrated post-consumer recycled plastic (including some ocean-bound plastic material) into the speaker box. That’s not something that users will be able to see with their eyes, but it’s an effort on HP’s part to be a bit more eco-friendly.

Dealmaster: All of the laptops worth buying during Cyber Monday 2019

Electronics sales are plentiful during Black Friday and Cyber Monday, so this is one of the best times of the year to buy a new laptop. To help you make an informed decision while removing the need to wade through the sea of deals, the Dealmaster is back with all of the worthwhile laptop deals you can buy right now for Cyber Monday.

Of note from our list are a few deals on some of our favorite laptops, like the 7th-gen Lenovo ThinkPad X1 Carbon. Now you can get Lenovo’s premium workstation with an 8th-gen Core i5 processor, 8GB of RAM, 256GB SSD, and a 14-inch 1080p display for $999. This slashes $400 off the laptop’s regular price, and in general, it’s always worth waiting for the rare sales that bring the price of the X1 Carbon down to $1,000 or less. This is the newest version of the X1 Carbon, but you’ll have to settle for an 8th-gen Intel processor rather than the newest 10th-gen processors (you can get the X1 Carbon with those, but you’ll have to pay more).

HP has a good deal on the Envy x360 15t—a model with a 10th-gen Intel Core i7 processor, a 15.6-inch FHD touchscreen, 8GB of RAM, 256GB SSD, and 16GB of Optane memory is now just $649. The Envy 13 laptop impressed us by being an affordable alternative to the Spectre series of laptops, and this deal is for the 15-inch convertible version. It’s a laptop that’s arguably as sleek as its Spectre counterpart and nearly as powerful, and this Cyber Monday price makes it even more of a no-brainer purchase.

There are also a number of Chromebooks on sale today, including our current favorite: the Asus Chromebook Clip C434 with a Core m3 processor, an FHD touchscreen, 4GB of RAM, and 64GB of storage is now $469. Not only is this one of the best designed Chromebooks you can buy, but it’s also a fairly powerful machine for the price. You can find plenty of Chromebooks for under $400 (some good ones are even more affordable today with Cyber Monday sales), but we recommend the Asus Chromebook Flip for anyone who plans to push the machine to its limits in terms of Web browsing, app usage, multitasking, and more. We also appreciate that it has a good battery life (roughly an average of 11.25 hours in our testing), a microSD card for expanded storage, and a handy convertible design.

Those are just a few of the laptops on sale today. Check out the full list of Cyber Monday laptop deals below.

Note: Ars Technica may earn compensation for sales from links on this post through affiliate programs.