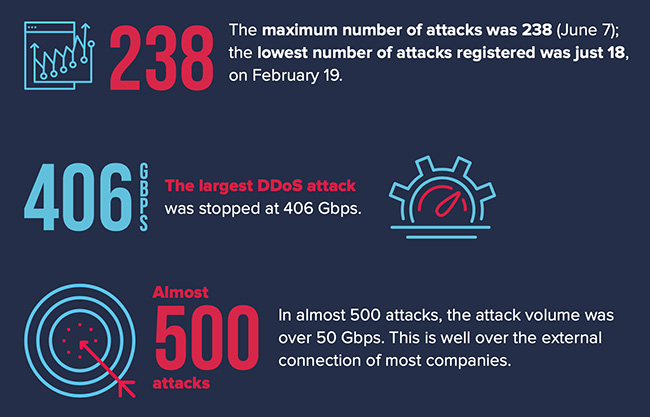 Key findings from the annual report include:

The data showed that the frequency of DDoS attacks depends on the day of the week and time of the day, with most attacks concentrated around weekends and evenings. More attacks were registered on Saturdays, and out of office hours on weekdays.

“The pandemic has forced organizations to accelerate their digital transformation plans, but has also increased the attack surface for hackers and criminals – and they are looking to take full advantage of this opportunity by taking critical systems offline to cause maximum disruption. This ‘new normal’ will continue to represent a major security risk for many companies, and there is still a lot of work to do to secure networks and systems against the volume attacks. Organizations need to invest in security solutions based on automation, AI and Machine Learning that are designed to tackle multi-vector attacks and networked security mechanisms,” said Marc Wilczek, COO, Link11.

The volume and complexity of attacks continued to grow in the first quarter of 2020, according to Link11.

There has been an increasing number of high-volume attacks in Q1 2020, with 51 attacks over 50 Gbps. The average bandwidth of attacks also rose, reaching 5,0 Gbps versus 4,3 Gbps in the same quarter in 2019.

Marc Wilczek, COO of Link11 said: “The threat landscape is changing as a result of the COVID-19 outbreak. With more people working remotely, there is a greater emphasis on virtual networks which need to be accessible from multiple locations.

“This is creating the perfect scenario for DDoS attackers to overwhelm networks and cause serious disruption. To address this, organizations need to be more proactive in their approach to DDoS protection, in order to respond to these ever-evolving threats.”

The coronavirus pandemic is upending everything we know. As the tally of infected people grows by the hour, global healthcare, economic, political, and social systems are bending and breaking under the strain, and for much of the world there’s no end in sight. But amid this massive wave of disruption, one thing hasn’t changed: the eagerness of cybercriminals to capitalize on society’s misfortune and uncertainty to sabotage, cripple, mislead and steal. 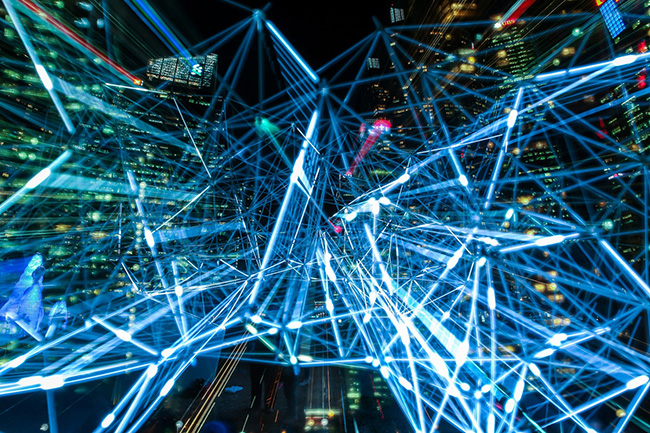 New states of emergency are being declared every day as the virus keeps spreading. Confirmed cases have meanwhile been reported in more than 150 countries on six different continents. Nations and organizations everywhere are working around the clock to flatten the COVID-19 curve by imposing remote work policies, travel bans, and self-isolation.

In an unprecedented time like this, the reliance on the Internet is growing exponentially, turning the data highway into an even more indispensable channel for communication, information sharing, commerce, and everyday social interaction.

To prevent their phone lines from being overwhelmed with information requests, governments around the globe are making digital the default communication stream and directing citizens to the official websites of their health ministries or public health agencies for COVID-19 updates. People are hitting Facebook and other social media like never before to keep up with and share the latest news. Telecom giant Vodafone has reported a 50% surge in European internet use, and Netflix has been requested to cut its bitrate in Europe for 30 days in order to prevent the Internet from collapsing.

In this context, a cyberattack that denies organizations or families access to their devices or data could be catastrophic. In a worst-case scenario, one or more cyberattacks could cause broad-based infrastructure shutdowns that take whole communities or cities offline and further hinder already overburdened healthcare providers, transportation systems and networks.

Germany, Italy and Spain are among the many countries and jurisdictions (like New York and California) that have implemented draconian measures to limit the spread of the COVID-19 virus. Non-essential businesses have been made to close, and people to stay at home. Consequently, citizens are relying heavily on delivery services, which continue to operate. However, in Germany, cybercriminals recently unleashed a DDoS attack on one of the largest home delivery platforms, which affected customers and owners of more than 15,000 restaurants across the country. The criminals asked for two bitcoins (worth roughly $11,000) to stop the siege.

A few days earlier, the U.S. Department of Health and Human Services (HHS) suffered a DDoS attack, assumed to have been launched by a hostile foreign actor, aimed at slowing down the agency’s services amid the government’s rollout of a response to coronavirus. The incident allegedly tried to overload HHS servers with millions of hits in just hours. The attack in the US occurred just two weeks after Australia’s federal cyber agency warned that Australian banks were in the crosshairs of extensive DDoS extortion campaigns.

The perils of DDoS attacks on VPN servers

When it comes to remote work, VPN servers turn into bottlenecks. Keeping them secure and available is a number-one IT priority. Hackers can launch DDoS campaigns on VPN services and deplete their resources, knocking out the VPN server and limiting its availability. The implications are clear: Since the VPN server is the gateway to a company’s internal network, an outage can keep all employees working remotely from doing their job, effectively cutting off the entire organization from the outside world.

During an unprecedented time of peak traffic, the risk of a DDoS attack is growing exponentially. If the utilization of the available bandwidth is very high, it does not take much to cause an outage. In fact, even a tiny attack can become the last nail in the coffin. For instance, a VPN server or firewall can be taken down by a TCP blend attack with an attack volume as low as 1 Mbps. SSL-based VPNs are just as vulnerable to an SSL flood attack, as are web servers.

Making matters worse, many organizations either use in-house hardware appliances or rely on their Internet carrier to ward off incoming attacks. These deployment models tend to run with low levels of automation, requiring human intervention of some sort to operate. If someone or something throws a digital wrench into the system, fixing the problem remotely will be an uphill battle if there are few or no IT staff on-site. Since these deployment models typically require 10 or even 20 minutes before they even detect an incident, any attack will almost inevitably cause a major outage.

The Application Programming Interface (API) is a key part of every cloud service or web app. APIs enable service integration and interoperability – by, for instance, enabling any given app to process a payment from PayPal or a client’s credit account in order to complete the transaction. But they can also turn into single point of failure that expose companies to a wide variety of risks and vulnerabilities. When a business-critical application or API is compromised, it knocks out all the operations related to the business and initiates a potentially devastating chain reaction.

Guarding against or managing application layer attacks – such as an HTTP/HTTPS flood – is especially difficult, as the malicious traffic is hard to distinguish from regular traffic. Layer-7 attacks are in that sense highly effective, as they require little bandwidth to create a blackout.

Cybercriminals take advantage of human foibles to break through systemic defenses. In a crisis, especially if prolonged, IT people run the risk of making mistakes they would not have made otherwise. Attackers might cut off system administrators from their own servers while they run virtually rampant through the company network, steal proprietary data, or ingest ransomware. Any downtime can alienate customers, erode trust and cause negative publicity, even anxiety.

Organizations should remain vigilant and prepare for attacks in advance, before they occur, as this sort of incident can be very difficult to respond to once the attack unfolds. Companies should also continue to opt for cloud services to take advantage of scalability, and higher bandwidth to maintain redundancy. Most importantly, during times of remote work and self-isolation, radical security automation is more important than ever in order to ensure an instant response and get human error out of the equation.

The frequency of DDoS attacks depends on the day and time

Multivector and cloud computing attacks have been rising over the last twelve months, according to Link11. The share of multivector attacks – which target and misuse several protocols – grew significantly from 46% in the first quarter to 65% in the fourth quarter. 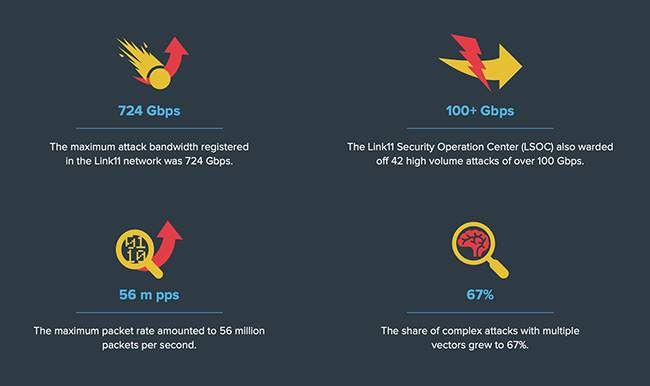 DNS amplification was the most used technique for DDoS attackers in 2019 having been found in one-third of all attacks. The attackers exploited insecure DNS servers, of which there were over 2.7m worldwide by the end of 2019, according to the Open Resolver Project.

The proportion of DDoS attacks that involved corrupted cloud servers was 45% between January and December; this is a 16% increase over the same time period the previous year. The proportion rose to 51% over the last six months of 2019.

The number of attacks traced to cloud providers was roughly proportionate to their relative market share, with more cases of corrupt clouds registered for AWS, Microsoft Azure and Google Cloud.

The data showed that the frequency of DDoS attacks depends on the day of the week and time of the day, with most attacks concentrated around weekends and evenings. More attacks were registered on Saturdays, and between 4pm and midnight on weekdays.

There was also a number of new amplification vectors registered by the LSOC last year including WS–Discovery, Apple Remote Management Service and TCP amplification, with registered attacks for the latter doubling compared to the first six months of the year.

The LSOC also saw an increase in ‘carpet bombing’ attacks in the latter part of 2019, which involves a flood of individual attacks that simultaneously target an entire subnet or CIDR block with thousands of hosts.

This popular method spreads manipulated data traffic across multiple attacks and IPs. The data volume of each is so small that it stays under the radar and yet the combined bandwidth has the capacity of a large DDoS attack.

Marc Wilczek, COO of Link11 said: “There was a noticeable surge in attack bandwidths and volumes, and in multivector attacks in 2019, due in part to the increased malicious use of cloud resources and the popularity of IoT devices.