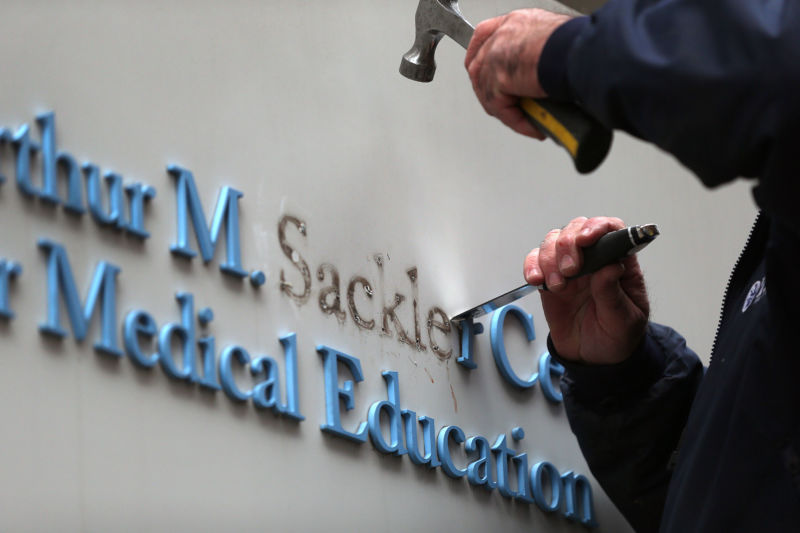 Enlarge / A Tufts employee removes letters from signage featuring the Sackler family name in Boston on Dec. 5, 2019. Tufts University stripped the Sackler name from buildings and programs after months-long conversations and a report that censured the school for its relationship with the family behind OxyContin, an opioid blamed for hundreds of thousands of deaths nationwide. The Sackler family gave Tufts $15 million over nearly 40 years and got its name prominently displayed throughout the university’s Boston health sciences campus.
Getty | Boston Globe

As the epidemic of opioid abuse and overdoses ravaged the United States—claiming hundreds of thousands of lives—the Sackler family withdrew more than $10 billion from its company, OxyContin-maker Purdue Pharma. That’s according to a new 350-page audit commissioned by Purdue as part of the company’s Chapter 11 bankruptcy restructuring.

The revelation is likely to fuel arguments from some states that say the Sacklers should offer up more cash to settle the more than 2,800 lawsuits accusing them and Purdue of helping to spark the opioid crisis. The plaintiffs in those cases—mostly states and local governments—collectively allege that Purdue and the Sacklers used aggressive and misleading marketing to push their highly addictive painkillers onto doctors and patients.

In a proposed $10-$12 billion settlement, the family has offered at least $3 billion of its own fortune. The family also said it would give up ownership of Purdue, which will transform itself into a public-benefit trust.

While some of the states have tentatively agreed to the deal, 24 states say that the offer isn’t good enough—and that the information in the new audit proves it.

The fact that the Sackler family removed more than $10 billion when Purdue’s OxyContin was directly causing countless addictions, hundreds of thousands of deaths, and tearing apart millions of families is further reason that we must see detailed financial records showing how much the Sacklers profited from the nation’s deadly opioid epidemic… We need full transparency into their total assets and must know whether they sheltered them in an effort to protect against creditors and victims.

The audit doesn’t reveal the family’s total worth or where all the Purdue money ended up. But what it does reveal doesn’t paint a flattering picture of the Sacklers.

Most strikingly, the audit shows that the family dramatically ramped up its withdrawals as the opioid epidemic raged. Between 1995 and 2007, the family withdrew just $1.3 billion from Purdue. But from 2008 to 2017, the family’s withdrawals totaled $10.7 billion, peaking at $1.7 billion in 2009, as The New York Times points out.

In 2007, Purdue and three of its executives pleaded guilty in federal court to misleading regulators, doctors, and patients about the addictiveness and abuse-potential of OxyContin.

The boost in withdrawals and its timing appear to support the argument from some states that the Sacklers were trying to shield OxyContin profits from the avalanche of litigation they saw coming. As NPR notes, a briefing filed in court and signed by 25 attorneys general read:

The Sacklers knew that the profits were not safe inside Purdue. Richard Sackler warned, in a confidential memo, that the company posed a “dangerous concentration of risk.” Purdue’s CFO stated that a single lawsuit by a state attorney general could “jeopardize Purdue’s long-term viability.” So the Sacklers pulled the money out of the company and took it for themselves. The Sacklers have directed Purdue to pay their family as much as $13 billion.

Where the money ended up is still unclear. As the NYT points out, money was often directed to trusts in places considered tax havens, such as Luxembourg or the British Virgin Islands. The audit also outlined the complex way in which the family sometimes moved money around. In some cases, Purdue money moved through a series of companies, including Rosebay Medical and Beacon Co., holding companies controlled by the family. In 2017, a set of a dozen transactions moved money through several companies before finally directing it to a Japanese division of Mundipharma, the Sacklers’ global pharmaceutical company. The audit does not provide an explanation for the transfers.