High-profile Twitter accounts hijacked to push Bitcoin scam. How did it happen?

The Twittersphere went into overdrive on Wednesday as a bunch of prominent, verified Twitter accounts were hijacked and started promoting a COVID-19 cryptocurrency giveaway scam. 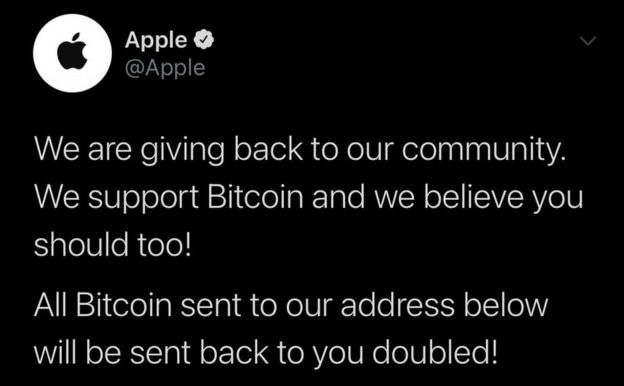 Twitter reacted by locking down the affected accounts, removing Tweets posted by the attackers, and limiting functionality for all verified accounts, but not quickly enough to prevent many gullible users falling for the scam and sending money to the attackers.

“The accounts tweeted that they ‘partnered with’ a company called CryptoForHealth. The domain for this website was registered on July 15. The website itself claims that, to help with the hard times endured by COVID-19, they’re partnering with several exchanges to provide a ‘5000 Bitcoin (BTC) giveaway’ which is a ruse for advanced free fraud,” Satnam Narang, Staff Research Engineer at Tenable, explained.

This type of scam is common, but what makes this incident notable is that the scammers have managed to legitimate Twitter accounts to launch it, he notes. Because of this, users were more likely to place their trust in the CryptoForHealth website or the provided Bitcoin address.

RiskIQ has since identified some 400 domains linked to the one used for this scam, effectively brining to light the threat infrastructure belonging to the attackers.

Before Twitter locked the hijacked accounts and deleted the scammy tweets, the attackers apparently received nearly $118,000 in Bitcoin.

As the compromised accounts began tweeting the scam in a coordinated manner, many speculated on how they attackers pulled off the massive compromise.

It soon became quite obvious that the attackers must have compromised them all from one central place.

Some users noticed that some of the hijacked accounts had been associated with one specific email address:

Motherboard’s sources said that a Twitter insider (admin) was bribed or coerced to use an internal user management tool to reset the email address and password on the affected accounts. Others speculated that the attackers managed to compromise the corporate account of a Twitter employee.

“We detected what we believe to be a coordinated social engineering attack by people who successfully targeted some of our employees with access to internal systems and tools. We know they used this access to take control of many highly-visible (including verified) accounts and Tweet on their behalf. We’re looking into what other malicious activity they may have conducted or information they may have accessed and will share more here as we have it,” the company explained.

“We have locked accounts that were compromised and will restore access to the original account owner only when we are certain we can do so securely. Internally, we’ve taken significant steps to limit access to internal systems and tools while our investigation is ongoing. More updates to come as our investigation continues.”

The attack points to a greater poblem

Many have pointed out that, given how much US politicians depend on Twitter to keep the citizenry informed about their thoughts and actions, the attackers could have used the access to those accounts to do much more damage.

Others have posited that the Bitcoin scam was perhaps just a smokescreen:

Stage 1: Throw up simple bitcoin scam for some nice walkin-around money.
Stage 2: Exfiltrate DMs for later use in blackmail, etc. If you’re already sitting on data like OPM, etc., you have a nice amount of kompromat for leverage/profit.

US Senator Josh Hawley demanded from Twitter more information about the hack, including and answer to the question of whether the attack threatened the security of US President Donald Trump’s account (which has not be made to tweet out the scammy message).

“The news of this exploit is extremely concerning as it really focuses attention on the inherent weaknesses in Big Tech security, which has been a point of focus across the country as we head into a presidential election and as we navigate the challenges driven by the pandemic. Disinformation and exploitation of supposedly trusted social media channels only amplifies the anxieties and concerns that consumers and citizens are already dealing with in this country and others.”

“Given the accounts’ relatively high profile, including that of a former US President, it’s likely that federal law enforcement and intelligence assets from both the public and private sector will be brought to bear on this very problem,” noted Kevin O’Brien, Co-Founder and CEO, GreatHorn.

“It’s highly likely that this will result in attribution, although I suspect we’ll find that this occurred from a non-US location, increasing the difficulty of apprehending the responsible parties.”

Ping Identity, the Intelligent Identity solution for the enterprise, announced the availability of PingID multi-factor authentication (MFA) in AWS Marketplace. Customers can now quickly procure and deploy PingID to secure work from home while adding an additional layer of security to their AWS infrastructure.

The PingID MFA service makes it easy for enterprises to offer strongly authenticated access to applications running nearly anywhere, in the cloud, on-premises or across hybrid IT environments.

“Ping Identity is committed to working with AWS to address the security needs of today’s enterprises as they continue their digital transformation initiatives and migrate to the cloud,” said Loren Russon, vice president, product management and technology alliances, Ping Identity.

“Adding PingID to AWS Marketplace is another important step in helping our global customers quickly increase security at scale and enable secure work from home solutions.”

RSA Conference 2020 is underway at the Moscone Center in San Francisco. Check out our microsite for the conference for all the most important news. Part one of the photos is available here.

Here are a few photos from the event, featured vendors include: Tenable, Ping Identity, PKWARE, eSentire, Deloitte, Securonix, and Futurex. 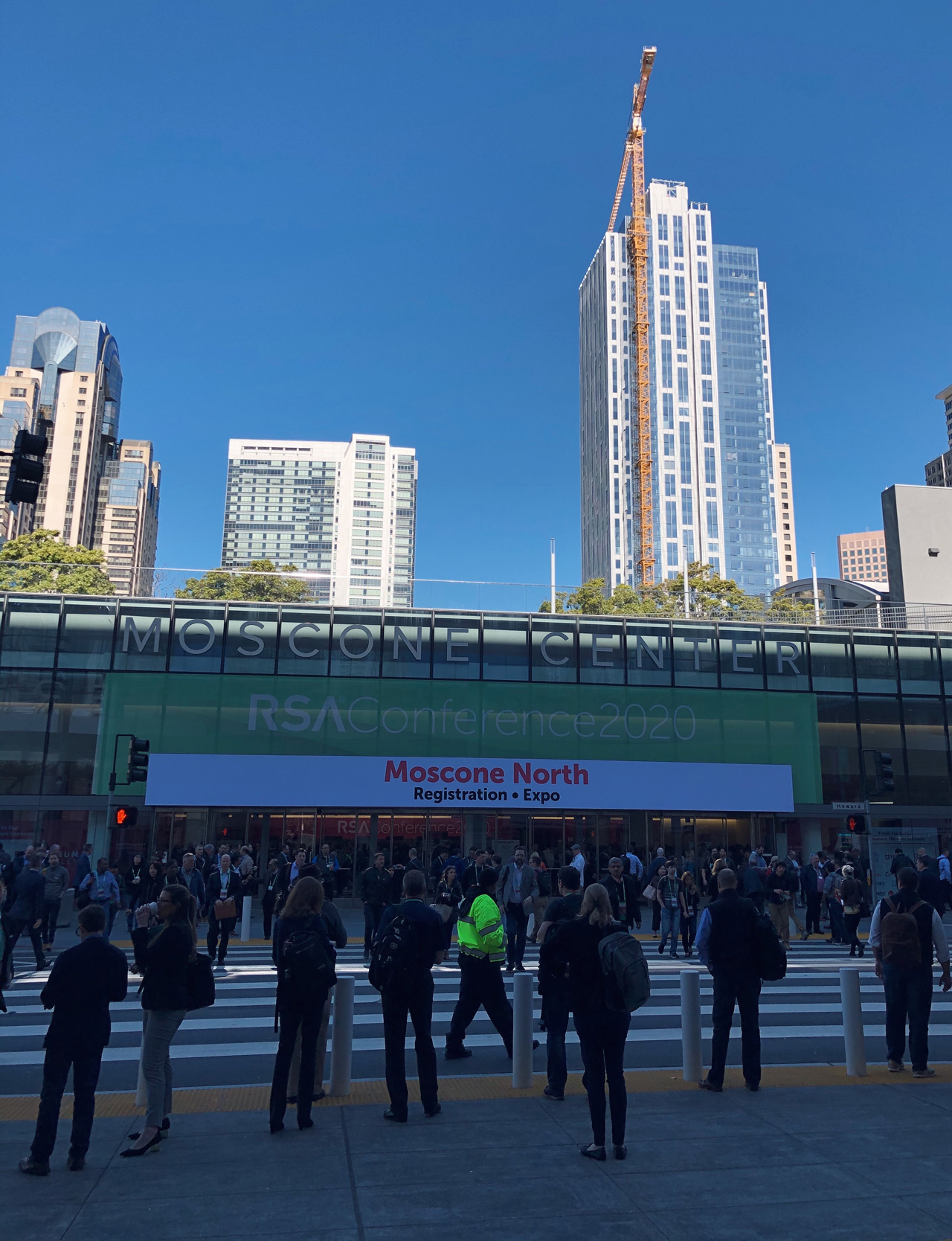 As organizations move away from a static perimeter-based security approach, they’re embracing strategies that require authentication and authorization of every user, device, and network, as well as dynamic policies that factor in numerous risk signals, and intelligent data sources.

ID DataWeb and Ping Identity partner to verify that users are who they say they are during device registration as part of step-up authentication and account recovery. “Continuous identity verification is an essential security component,” states Matt Cochran, VP of Product and Operations, ID DataWeb.

“Our customers need to instantly verify three aspects of their users—who they are, their physical context and their relationships. The result is that they can drive decisions for account opening, authentication or sensitive transactions.”

“Ping Identity provides an authentication authority, which when combined with our unified endpoint management software allows for heightened security based on a range of device attributes. The result is a more secure mobile work experience and increased productivity.”

New integrations take this one step further, allowing IT teams to benefit from automatic termination of a user session in the event of potential security risk.

“To protect the business, security must be invisible to users and omnipresent. Traditional security methods that treat users as an IP address and rely on firewall appliances hosted in a datacenter are antiquated in today’s mobile cloud-driven workplace,” says Punit Minocha, SVP of Business and Corporate Development, Zscaler.

“We are happy to be working with Ping Identity to help protect enterprise data and enable cloud transformation by bringing together two Zero Trust ecosystem leaders built with user experience and scalability in mind.”

Ping Identity, a pioneer in Intelligent Identity solutions, announced significant updates to the Ping Intelligent Identity platform, including improved support for DevOps, multi-cloud automated deployment, as well as secure user authentication experiences that are designed to safely eliminate the use of passwords.

The automated deployment of these solutions support DevOps workflows and multi-cloud deployment across the growing list of cloud providers that support Docker and Kubernetes.

These new deployment options provide extremely fast time-to-value for IT teams tasked with infrastructure management, and can enhance security and reliability by reducing the risk and cost of inconsistent configurations.

Dedicated cloud environment: As enterprises progress on their cloud transformation journeys, some are choosing to outsource IAM infrastructure management to improve efficiencies and lower costs.

PingCloud Private Tenant provides customizable security and control in a Private Cloud, including data isolation to help ensure global organizations remain compliant and a step ahead of regulatory requirements.

Cloud service customization: PingOne for Enterprise provides a multi-tenant cloud solution that is fast and easy to setup and manage, and now provides additional branding and customization options to present a more seamless user experience.

Expanded global reach: As demand for PingOne for Customers grows, Ping has responded by expanding its deployment to its data center in the Asia-Pacific region to improve performance and address regional data compliance needs.

Passwordless with FIDO: Ping Identity expanded use cases for passwordless authentication with the additional support of the FIDO2 standard.

“At Ping, we’re dedicated to providing our enterprise customers the customizable cloud solutions they need to achieve their modernization initiatives.”

Ping Identity extends its board of directors

Ping Identity, a pioneer in Intelligent Identity solutions, highlights the appointments of Yancey Spruill and Lisa Hook to its board of directors prior to its recent initial public offering. Yancey Spruill is an experienced executive in the technology sector, and currently serves as the chief executive officer of DigitalOcean, a privately-held cloud computing company. Prior to DigitalOcean, he also served as the chief financial officer and chief operating officer at SendGrid a cloud-based email communications … More →

The post Ping Identity extends its board of directors appeared first on Help Net Security.