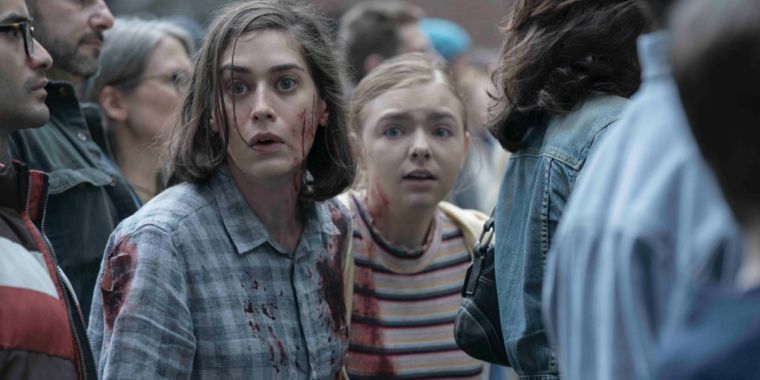 A nurse on the run with her teenaged daughter ends up stranded in a small Maine town where something evil lurks in the second season of Castle Rock, Hulu’s psychological horror anthology series that draws inspiration from the works of Stephen King. The series was a surprising breakout hit last summer, and this new season doesn’t disappoint, bringing the same slow burn and unexpected twists leading to a riveting finale.

(Mild spoilers for season one and season two below.)

The fictional town of Castle Rock features in so many of King’s novels that co-creators Sam Shaw and Dustin Thomason thought they could use it as an organizing principle for their storytelling. The series is less a direct adaptation of King’s works and more new stories set in the fictional town that occasionally bump up against various books. The biggest King influences for season one were The Shawshank Redemption and The Green Mile—in other words, a prison-centric setting with themes of crime and punishment. Shawshank tells the story of a prisoner’s disappearance, while Castle Rock‘s focus is the mysterious appearance of a prisoner nobody knew about.

Season one opened with the suicide of the local prison warden, Dale Lacy (Terry O’Quinn) and the discovery that he secretly kept a mysterious young man—known only as the Kid (Bill Skarsgård)—captive for decades. Not only did the Kid not age, violent outbreaks seemed to follow in his wake. The show remained cagey about who the Kid was, whether he was a monster or a victim, even in the finale, with its distinctively King-like denouement.

The season highlight was the heartbreaking seventh episode, “The Queen,” told entirely from the point of view of Ruth (Sissy Spacek), whose age-related dementia is rapidly worsening and affecting her ability to distinguish between the present and the past. (At several points, she walks out of a conversation in the present and into a different conversation in 1991.)  The episode has deep personal resonance for Shaw, whose own mother suffered from dementia and died unexpectedly a few days after he started writing the series. I called it “the most beautifully constructed, superbly acted hour of television you’re likely to see this year.”

Castle Rock‘s second season doesn’t have a single standalone episode of quite the same caliber, but it still packs a punch. The source material this time around is King’s award-winning 1987 novel Misery, featuring one of his most memorable characters, Annie Wilkes, a psychotic (and murderous) former nurse.

In the novel, a middle-aged Annie rescues her favorite novelist, Paul Sheldon, after a car accident in which he breaks both legs. Paul’s last novel killed off the central heroine of his Victorian romance series, Misery Chastain, as he had grown tired of the character and wanted to write crime novels. But his “Number One fan,” as Annie calls herself, refuses to accept Misery’s demise and holds Paul captive, forcing him to resurrect Misery in a new novel—or else. The 1990 film starred Kathy Bates as Annie, who won an Oscar for her performance, which included an infamous scene in which Annie hobbles Paul’s feet with a sledgehammer to ensure he can’t escape.

In King’s novel, it’s clear that Annie suffers from schizophrenia and/or bipolar disorder. Paul Sheldon discovers a scrapbook of newspaper clippings hinting that Annie was accused and acquitted of killing infants at a hospital maternity ward in Colorado and may have murdered as many as 30 people. Castle Rock‘s storyline focuses on a youthful Annie (Lizzy Caplan) on the run from an unspecified past with her teenaged daughter Joy (Elsie Fisher). Annie takes stints as a nurse in various hospitals and stays just long enough to steal the medication she needs to keep her mental illness in check before hitting the road in search of a utopian vision she calls the “laughing place.”

Naturally, the pair ends up in Castle Rock, and Annie takes a job with the hospital in nearby Jerusalem’s Lot—the second of King’s trinity of fictional Maine towns, the third being Derry (the setting for IT). When Annie’s killer instincts get the better of her, she tries to dispose of a body at a local construction site and uncovers a hidden burial site linked via a tunnel to the abandoned Marsten House. (King fans may recall the Marsten House was home to the vampires in the 1975 novel ‘Salem’s Lot.) And she inadvertently awakens something evil that has been lying in wait for four centuries.

Caplan gives a fantastic performance as Annie, capturing the character’s trademark awkward earnestness, lack of direct eye contact, stiff gait, and odd speech patterns and phrasing (“dirty bird,” “cockadoodie,” and the like). It’s a very human (and humane) depiction of someone struggling to control her mental illness. Annie may be a little crazy, particularly when her meds run out, but she’s driven primarily by her love for Joy and proves to be a formidable opponent to anything that would threaten her daughter.

Season two also stars Tim Robbins as a veteran named Reginald “Pop” Merrill. Despite his late-stage cancer, he wields a tight hold on local commerce with the help of his two nephews, Ace (Paul Sparks) and Chris (Matthew Alan). Pop also adopted two Somali refugees as teenagers, now grown: Abdi (Barkhad Abdi), who is building a mall in Jerusalem’s Lot, and his sister, Nadia (Yusra Warsama), the medical director at the hospital where Annie works. The family gets sucked into the supernatural threat facing the town(s), too. Over the course of ten episodes, tensions flare, secrets are revealed, and we learn the true nature of what Annie awakened.

As always with a Shaw-created show, the writing is strong and emotionally evocative. It’s intricately plotted, with strong character development. Granted, for the first several episodes of the season, the two narrative threads—Annie and Joy’s relationship and Annie’s secret past, and whatever the hell is going on at the Marsten House—almost don’t feel like they are part of the same series. The Annie storyline feels far more compelling—especially the flashback episode, “The Laughing Place,” which acquaints us with Annie’s childhood.

But gradually the two threads converge as we learn more about the town’s history—including an unexpected twist that provides a link between season two with season one. Here’s hoping Castle Rock gets a third season so we can learn more about this common element loosely tying the anthology’s storylines together.