The pandemic is hard on everyone. (says the Master of the Obvious) It’s a combination of things. There are layers of fear — both from the standpoint of the health impact, as well as the financial challenges facing so many. We cannot underestimate the human toll, and unfortunately, the US has never prioritized mental health. As I mentioned last week in my inaugural new Insight, I’m not scared for myself, although too many people I care about are in vulnerable demographics. I’m lucky that (at least for now) the business is OK. I work in an industry that continues to be important and for a company that is holding its own.

But it’s hard not to let the fear run rampant. The Eastern philosophies teach us to stay in the moment. To try to focus on what’s right in front of you. Do not fixate on decisions made or roads not taken. Do not think far ahead about all of the things that may or may not come to pass. Stay right here in the experience of the present. And I try. I really try to keep the things I control at the forefront.

Yet there is so much I don’t control about this situation. And that creates a myriad of challenges. For example, I don’t control the behavior of others. I believe the courteous thing to do now is wear a mask when in public. There are certainly debates about whether the masks make a real difference in controlling the spread of the novel coronavirus.

But when someone near me is wearing a mask, it’s a sign (to me anyway) that they care about other people. Maybe I’m immunocompromised (thankfully I’m not). Maybe I live with someone elderly. They don’t know. The fact is they likely don’t have the infection. But perhaps they do. It’s about consideration, not about personal freedoms. I have the right to approach someone sitting nearby and fart (from 6 feet away, of course). But I don’t do that because it’s rude. I put wearing a mask into the same category.

But alas, I don’t control whether other people wear masks. I can only avoid those that don’t. NY Governor Andrew Cuomo said it pretty well. 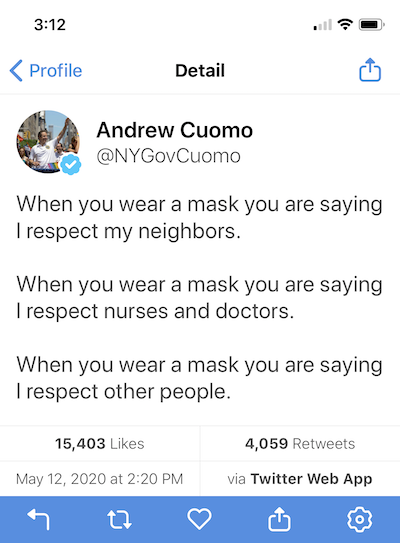 I don’t control who takes isolation seriously and who doesn’t. Many people have decided to organize small quarantine pods who isolate with each other because they don’t see anyone else. This arrangement requires discipline and trust and doesn’t scale much past 2 or 3 families. Being in a blended household means that I had my pod defined for me. There are my household and the households of both of our former spouses.

It’s hard to keep everyone in sync. My kids were staying with their Mom in the early days of quarantine. But my son was seeing other kids in the neighborhood. Not a lot, but a few. And supposedly those kids were staying isolated – until they weren’t. One of the neighbors had a worker in the house and then had a visitor who was a healthcare professional in Canada. Sigh. So he goes into isolation for two weeks, and I can’t see my kids.

Then my former spouse got religion about isolation and decided that she wasn’t comfortable with my pod, which includes Mira’s former spouse. She doesn’t know him, and in this situation, trust is challenging. Sigh. Another six weeks of not seeing my kids. Mira and I have done a few social distance walks with them, but it’s hard. You wonder if they are too close. So we adapted and set up chairs in a parking lot and hung out. It’s tough. All I wanted to do was hug my kids, but I couldn’t. 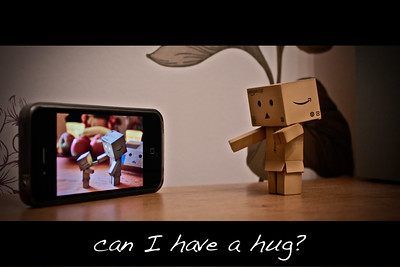 To be clear, in the grand scheme of things, this is a minor problem. A point in time that will pass. Maybe in 6 months, or maybe in a year. But it will pass. And I’ve got it good, given my health and ability to still work. Many people don’t. They may be alone, or they may not have a job. Those are big problems. But I also don’t want to minimize my experience. It sucks not to be able to parent your kids.

It’s getting more complicated by the day. Things in Georgia (where I live) are opening up. Many of the kid’s friends are getting together, and the reality is that we can’t keep them isolated forever. So their Mom and I decided we would keep things locked down through the end of May and then revisit our decision in June. My kids could stay with me for a little while. And that happened last week. When I went over to pick them up, I was overcome. It was only a hug, but it felt like a lot more than that. Over the past week, I got to wake them up, pester them to do online classes, eat with them, and sit next to them as we watched something on Netflix.

We were going to figure out week by week where the kids would stay. I’m not going anywhere, so that would work great. But the best-laid plans… I found out that my oldest is seeing her friends. And isn’t socially distancing. Sigh. She’s an adult (if you call 19 an adult), and she made the decision. I’m unhappy but trying to be kind. I’m trying to understand her feelings as her freshman year in college abruptly ended. She went from the freedom of being independent (if you call college independent living) to being locked up in her Mom’s house. That when you are 19, you don’t really think about the impact of your actions on other people. That you can get depressed and forget about the rules and do anything to take a drive with a couple of friends.

And now the other house where my kids live is no longer in my pod. One of the kids is with me, and she’ll stay for a couple of weeks. But after that, we have to go back to isolation. It’ll no more hugs for a while. And it makes me sad.