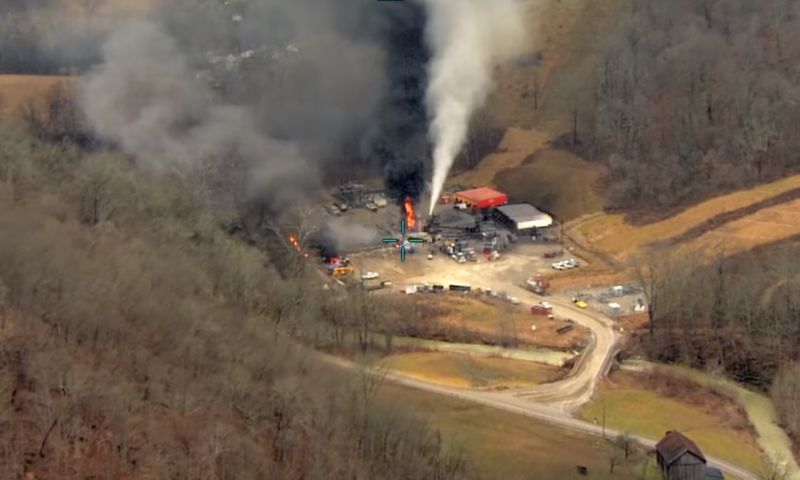 Enlarge / Helicopter footage of the well from the day after the explosion.
Ohio State Highway Patrol

In February 2018, an accident at a gas well in Ohio, near the West Virginia border, didn’t make as much national news as it should have. An explosion at the well caused a blowout, with billowing black smoke and gushing natural gas spewing into the air. It didn’t generate as much interest as the three-and-a-half-month-long leak from a California underground gas storage facility in 2015, but a new study published this week shows it was almost as bad.

The study, led by Sudhanshu Pandey at the SRON Netherlands Institute for Space Research, utilized measurements from ESA’s new Sentinel-5P satellite. Although it wasn’t quite officially operational at the time of the accident, the researchers were able to grab data. Unfortunately, although the leak went on for 20 days, there was too much cloud cover to use the data on all but two of those days.

The data, however, is quite good, as this satellite can deliver methane measurements at much higher resolution (about 7 kilometer) than others. The researchers were able to compare against days before the leak and also to compare the levels from upwind and downwind of the leaking well. They also used a simulation including the weather conditions on those days, calculating what the methane plume would look like for different rates of release.

Enlarge / The top image shows a simulation of methane concentrations downwind of the well, while bottom right shows the measurements made by the Sentinel-5P satellite. Bottom left overlays the simulation on those same grid cells for an apples-to-apples comparison.
Pandey et al/PNAS

They estimated the rate of methane release at 120 (±32) metric tons per hour. If you don’t know gas well methane leakage rates off the top of your head, that’s a lot. Estimated leakage rates from entire natural gas fields in the US—like the Haynesville Shale straddling the Texas/Louisiana border or the Uinta Basin in northeastern Utah—come in lower than that.

To calculate a total for the entire 20-day release, the researchers use that as their average. That probably underestimates it, though, as the measurement comes two weeks in. You would expect the emissions to start higher and drop as the pressure declines. Using these numbers, the total release is 60,000 (±15,000) tons. The 2015 accident in California—the second biggest recorded methane leak ever in the US—released about 97,000 tons.

Or, for another kind of context, the researchers point out that this Ohio well released more methane in 20 days than the oil and gas activities in most nations around Europe do in an entire year—save only the UK, Germany, and Italy.

The Ohio incident highlights an important fact about methane leakage from the oil and gas industry: it is dominated by a small number of malfunctioning sites often termed “superemitters.” That has made it challenging to accurately calculate the total leakage from the industry. (And to compare the climate impact of natural gas vs. coal power plants.)

Some researchers have tried to visit many sites, measuring leakage rates around each type of equipment to estimate average behavior. Other teams have tried a less targeted approach, flying overhead in aircraft and attempting to measure the overall behavior (and separate it from other sources of methane). That has generally led to larger estimates of leakage than the on-the-ground approach, in part because it’s easier to catch the superemitters.

The researchers say this case illustrates the value of the new Sentinel-5P satellite. Rather than having to know something is malfunctioning, or hoping that the occasional measurement catches a representative day, the satellite may reveal superemitters simply because it’s always watching.